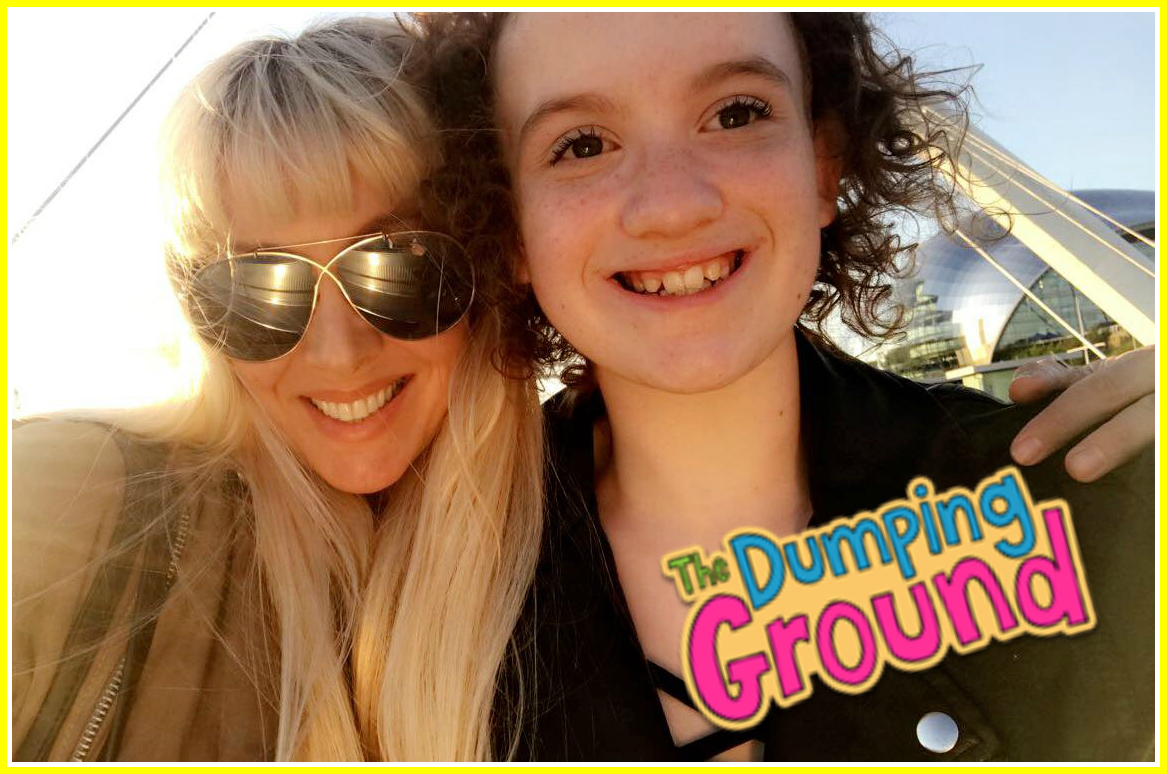 Katherine with 4.15 alumni Sarah Rayson who plays Floss Guppy in The Dumping Ground

Gosforth based performance arts company, Famous 4.15 have been working with children and young adults to develop their performance skills since 2001. Teaching singing, dance and drama, in a fun and friendly environment, they encourage freedom of expression, whilst keeping things fresh and making learning fun.  We chatted to Katherine Monaco, Principal at Famous 4.15, to find out more about her inspiration behind setting up the company and some of the exciting projects ahead.

Can you remember the first time you performed in front of an audience? How old were you and what was the show?
Yes, I do! I was 5, performing a tap number of ‘Walking in a Winter Wonder Land’. I was as graceful as an elephant at that age! I nailed the whole number until the very last step, then boom, I shuffle-ball-slipped centre stage and landed on my bootie, my ridiculous frilly dress around my head and matching knickers on show to the whole audience. Tap and ballet really weren’t my forte.

Growing up did you favour one discipline over the rest?
I was a dancer. Dance was definitely my thing! That ‘hallelujah’ moment when I found my commercial feet and realised, dancing wasn’t all about being a ballerina!

Touring the world with Sirens allowed us the creative freedom to choreograph most of our own tours, as well as work with some world famous choreographers and there was nothing more appealing to me than being locked in a dance studio for days rehearsing.

Singing came after dancing– when I formed the band Sirens with my buddy Karina. I’m a Hip Hop girl at heart and bands like TLC & The Beastie Boys inspired us to jump in to the music business headfirst. Young, fearless and completely naïve!

What made you want to set up a performing arts school?
I love working with young people and when I was young I didn’t have the opportunities to explore modern, relevant Performing Arts. ‘Stage’ schools were too expensive, very traditional and far too strict for my free spirited young self! After my experiences in the pop world I decided a PA hub that had a more current approach was sorely needed. We work with the kind of material and young, vibrant team of teachers that embraces that. My young self would have loved Famous 4.15!

Your music career with Sirens has taken you all over the world  – you must have had lots of adventures, what are your favourite memories?
LOTS! Meeting Kanye West in Tokyo, meeting Pudsey Bear in Carlisle and hearing our Number #1 American Dance Hit everyday whilst driving the school run with my fam in Houston!

Being produced by Ryan Tedder (One Republic), shooting Sirens Club LA LA video in L.A with RayKay (Lady GaGa’s director) and hearing our record played on BBC Radio 1 for the first time with my home girls! I could write a book, but there’s a taster!

Have you met lots of celebrities? Was there anyone you particularly liked?
Apart from our lovable fellow Geordies, Ant & Dec;  last year I had the pleasure of being invited to New York University as a guest of the legendary movie producer Spike Lee, for a screening and post show analysis of his Michael Jackson ‘Off the Wall’ documentary. The panel consisted of the head of Motown Records, DJ Spinner, the genius Quest Love and Spike Lee himself.  This was truly an education, in all things Michael, film, acting, music, LIFE! Walking through the streets of NYC with Spike Lee, is undoubtedly one of the most surreal and brilliant experiences I have ever had!

Do you have a favourite all time singer or group?
Michael Jackson.

Do you have a favourite musical?
Hamilton! I saw it during the opening run on Broadway, NYC and it blew my mind!

You must be very proud of your students, some who will have been with you from the age of 3 right through to 18. It must be hard to see them leave?
I’m so proud, I need a new word for proud! They’ve gained places at some pretty prestigious establishments from Mountview Academy of Theatre Arts, Trinity Laban, Italia Conti to name but a few!

It’s heart breaking to see them leave and heart warming to see how they’ve been touched so positively by their time with us. We have grown up together, shared experiences together and built memories together. An eclectic mix of very special young people who see Famous as a family. I can’t get rid of them though, they’re like elastic bands, they go away for a while but come back at any given opportunity armed with updates and *gossip!  *Our awesome Beth just popped in, fresh from dancing with Little Mix at the Brit Awards, she had all the low-down!

Who is the most famous person in your phone book?
Floss Guppy of CBBC’s The Dumping Ground! Floss is played by our lovable Sarah Rayson, a long-standing 415er who I have the pleasure of representing as an agent. Famous represents several young actors that I’ve placed in TV shows, short films, music videos.

The end of year show at Famous 415 is always a brilliant occasion involving the whole company including the tinies! There must have been lots of memorable moments?
It’s a pretty exciting time when everyone takes the stage! The anticipation, nervous energy and extreme excitement are a melting pot for many memorable moments. Some take the stage for the first time; some for the umpteenth time but each has their moment and their memory.

The whole creative process is inclusive, we build the shows around pop culture and each show is original. It builds confidence, friendships, teaches the importance of encouragement and support and makes the kids feel proud to be part of something special. The kids and team are united. Yes, they work hard and yes, it’s a logistical challenge having 100 plus children aged 3-18 years in the same production but it’s so worth it!

You clearly like a challenge! The resounding success of the Hit the North urban music festival in 2017 involving over 80 acts from around the world on one night in 12 venues was phenomenal. What are the plans for next year?
It was brilliantly received so next year we plan more of the same: lots of diverse acts in lots of diverse venues in our fantastic city but we plan to add an even greater cross genre range of artists (more Hip-Hop for me!). Primarily, new music and breaking artists with cool headliners. We’ll also definitely be preceding Hit The North with Meet The North again- a showcase for great new music from the region, which we hope will inspire and encourage young Northern artists.

You work with many young aspiring musicians, actors and dancers. What’s the best piece of advice you can give them?
Be yourself. Believe in yourself. Enjoy yourself!  The Famous ethos is simple: everyone can have his or her chance to shine, whether that means fifteen minutes spent singing into a hairbrush or a major role on stage or screen. We offer training that is relevant, exciting and inclusive but most of all we inspire self-belief, confidence and encourage everyone to be proud of who they are. If a child lacks in self-belief, they need not worry, we will have enough belief in them until they do!

Bring Your Polaroid Camera Back To Life